The Consolidated No. 8   Memorial Site and Monument
The Story of Progress --Skilled and Willing Helpers --Hard Work

This monument is on a one acre site  at the old con. 8 school corner,   something like 9 miles southeast of Roosevelt along  Highway 19. The road bends from south to west just one mile east of the site. A curved road passing near the monument connects the highway  to the county road going south which forms the western boundary of the plot.  The road easily accommodates a number of cars, but is designed to discourage parking of large semitrailer.

The active planning for the monument began at the 1999 Con. 8 reunion at which a Memorial Committee was selected.  Charlena (Dempsey) Mask and Willie (Jackson) serving as Co-Chairs;  Maggie (Barnes) Walker, Mary (Shockley) Ankney, and Zoe (Sims) McMillin as members.   But a lot of preliminary groundwork had been laid by Charlena and Willie over the previous two years.   Mr. and Mrs. Eric Jackson had already agreed to donate the land for the site subject there there being a wide support to building a site.

And there was a wide and enthusiastic support.   The generous contributions of money by friends and alumni, and of the land for a site by Mr. and Mrs. Eric Jackson  during the next nine months,  allowed planning to proceed.   Many have contributed their time as well as money,  but Charlena (Dempsey) Mask and Willie Jackson, Co-Chairs of the Memorial Committee and also living next door to the site,  have dealt with most of the work of coordination and supervision that had to be done.  It was a lot.

The preliminary design ideas for the site and the marker were assembled by the committee during the next nine months and  for the monument were submitted for bids in the early summer of 2000.   The overall contract for the marker stone and auxiliary structure were was made with Heritage Granite of Altus ( Lori Ray Hawkins head and designer).  At the same time and preliminary grading of the site was done by the County,  before the end of  August 2000, when this picture was taken.  The note on the picture says Charlena Mask is standing at the end of the arrow.  If you CLICK on the picture,  I think you can at least verify someone is standing there   USE BACK BUTTON TO RETURN HERE. 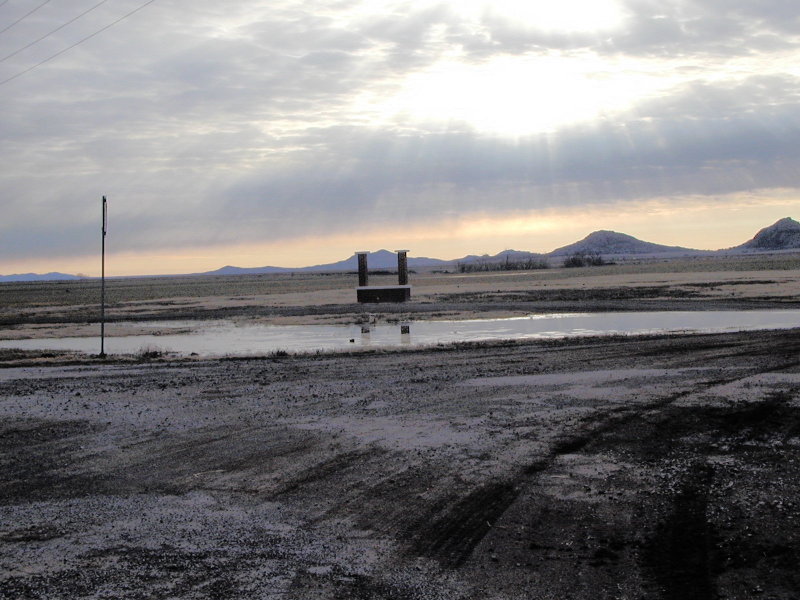 The brick supporting structure and  concrete pad were finished early this year as well as the grading and surfacing of the roadway.  On my visit at the end of January, it was mostly raining so the pictures at that time were not so bright as they might have been.   This picture taken February 3, 2001 shows the brick work and the road. CLICK on the image to get a full screen view.  Lori Hawkins subcontracted the brick and concrete work to Van Lazenby of Lone wolf.    Van looked all over to find brick that was a very close match to the old brick that Charlena had saved from the building with spectacular results.

The rain had been heavy, and the pool shown here is not a part of the final landscaping.  Just a week later,  the State Highway Department put in a culvert to provide drainage for this area.  So even if it rains, don't count on a lake.

In all of this undertaking,  State and the County personnel  helped with advice and got the site work done for us.  Our thanks to Mr. Randal Peck, State Department of Transportation;  Mr. Brad LaVelle, Supervisor for Road Construction in Kiowa County, Mr. Vick Anderson Foreman for Road Maintenance in Kiowa County and to the organizations they represent.   Also the County Commissioner for the Southwest District of Kiowa County,  Wayne Barker,  provided support, guidance and encouragement.
Then there were others who helped a lot.   Among them that I know of at the moment is  Mr. Joey Shulte and Mr. Bill Brentson of Meridian Agra who facilitated the donation by their company of the gravel that we have used thus far, and the promise of more as it is and will be needed.   The County has provided the delivery and distribution of that donated gravel.  And to whoever is not recognized yet, our thanks and apology for not getting it all together at this writing. 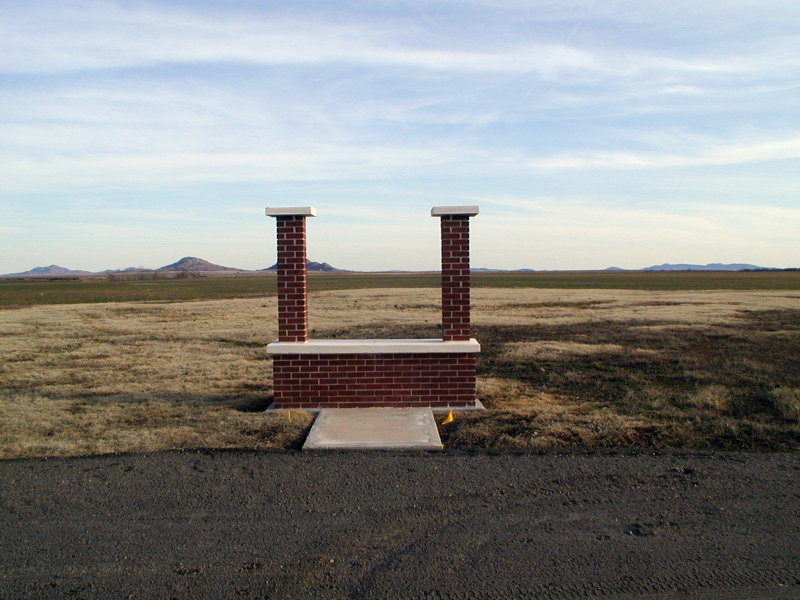 Late the same day I took the picture at right from closer up and from a different angle that shows more detail of the structure.

In parallel with all this physical development,  Charlena was working with Bruce Joseph of the Oklahoma Historical Society, to get the site registered with that society.  Our thanks to him for guiding it through the various steps.   Mr. Joseph and his wife drove down from Oklahoma City to be present at the Dedication;  and Bruce is now helping with the  contacts through which a file on the site and the history it represents will be established in the Archives of the OHS.

Now we were ready for the mounting of the stone.   Lori Ray Hawkins of Heritage Granite worked both expertly and patiently with Charlena and the Committee to get what we wanted on the stone, and at the same time to make sure we were ready for the July 7 Dedication.    That got done beautifully,   and then Van Lazenby who did the brick work put in the finishing touch of an elegant  cable barrier along the marker side of the drive-thru.    All that is shown as it was on the early evening   of July 5  in the Preview.  If you haven't seen that, link from the from the home page or directly here:  Preview   .  Otherwise back button will take you back to where you have been to continue.