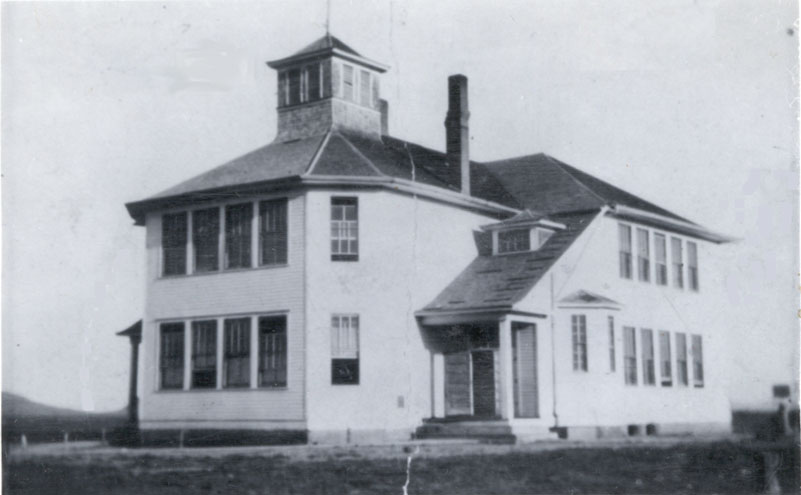 Note that the building is facing north.  The north and south twin mountains are just visible in the lower left hand corner. The notch between the two peaks is just to the left of the column at the left entry way.   Judging from their appearance the picture was taken from just about the northwest corner of the school yard.  The record book kept by W. P. Sims, Clerk of the School Board shows that the sidewalks were constructed in the 1914-15 or 1915-16 school years. The shadow of the column and roof of the portico indicates the sun is is well past the zenith hour above and is to the south of west so the month is probably between about November and February.

It would be nice to find the original of this picture and any supporting data giving date and possibly the occasion.  I saw it first at one of the early Con. 8 reunions, and this scan is from a rather good print that Maggie Barns had in her "scrapbook".  The article about Con. 8 by Meridith (Penn) Agnew in Vol. II of Pioneering in Kiowa County contains this picture. I expect that she supplied the print.

Incidental to this we mention  that in Vol. 6 of Pioneering in Kiowa County there is picture with Velma McFarland's article about Con. 8 which is labled the first Con. 8.  However there was a mixup in the pictures and it is instead a picture of Mullins School house in about 1927.