Con. 8 Community Reunions began in 1977 and have been held in Kiowa County every other year since then.  Maggie Barnes Walker, Nora Ritchie Walker, Eldon Dickson, and Kinley McClure constituted the enterprising nucleus that began the tradition for this event which has been mostly responsible for maintaining a sense of community origins for several hundred people scattered now over the whole US.    Since that time Maggie and Nora have continued to be a backbone of the resources for the effort, which has also been aided by many who served as chair or as members of the organizing committees;  and many others who were ever ready helpers.

For the last few reunions,  the classes celebrating their 49th & 50th reunions have taken the responsibility to form an Organizing Committee.  This year it was the class of 1950 and 1951.    There was a special feature for this year, the dedication of the  Con. 8  Historical-Memorial Site out west of Roosevelt on highway 19  -- Just 100 years after the land was opened for homesteading.

Don't miss the concluding page of the activities for which the link is at the end of this page!

The reunion was held at the Roosevelt Senior Citizens Center and  at 3:00 pm (and a bit before) people began to assemble. There they were greeted by the Co-Chairs of this years  Organizing 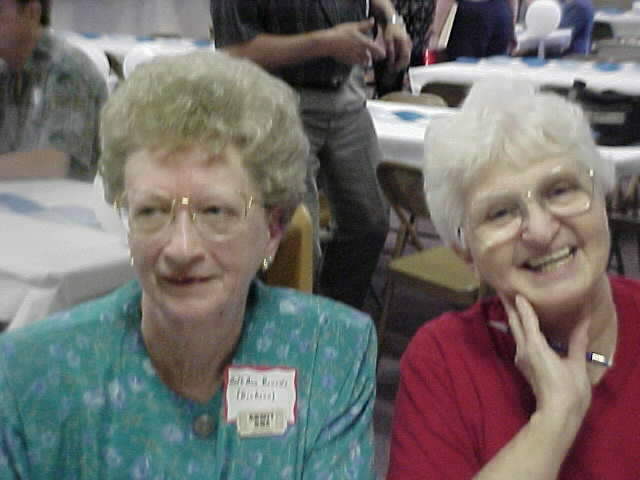 Committee,  Ruth Ann (Dickson) Rounds and Sylvia (Brewer) Terry.    These ladies  had already been working hard since early morning along with various willing helpers to get the tables laid out and decorations put up.  My!   The energy of these young people. They look as if they had just been relaxing all day.   This picture and all others on this page were provided by Ted Blish ('49). 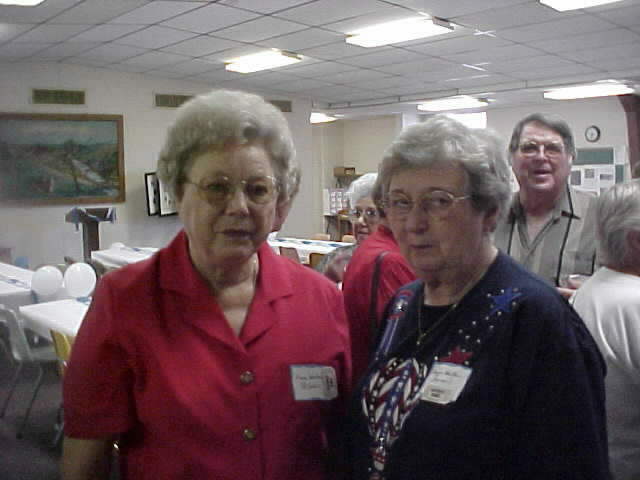 Also among the early arrivals that Ted  caught in  his viewfinder  were Maggie and Nora, the longtime sustainers of this effort, as was mentioned in the preamble.   Tommie Holder is beaming as if he had just heard a good story of the "good ol' days".

About the time everyone had seen a dozen or so old friends,  Sylvia blew the whistle!!   "Charlena says it's time we depart for the Con. 8 memorial site,  as it is agreed we all meet there at 4:00 pm".   So a few minutes later there were about 100 people 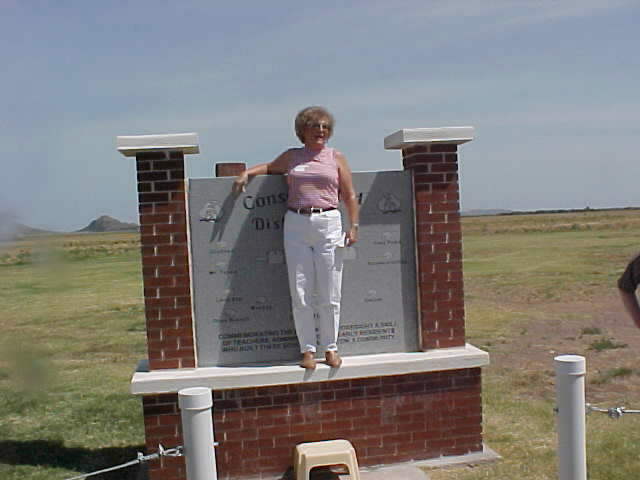 out at the old Con. 8 site,  perhaps the most there at once since the last classes in May, 1957;  but more likely the most since the Friends Community Church once across the road to the north disbanded in 1981.   The temperature was probably about 105 F., but Con. 8 'ers are tough,  so no one hardly noticed.     Charlena (Dempsey) Mask,  Chairman of the Memorial Committee, was the Mistress of Ceremonies.    In Ted's snapshot to the right,  she is telling people about all the help from many persons other than Con. 8'ers who  helped to make the site possible.  For  more about those important people see the link to Site Development. 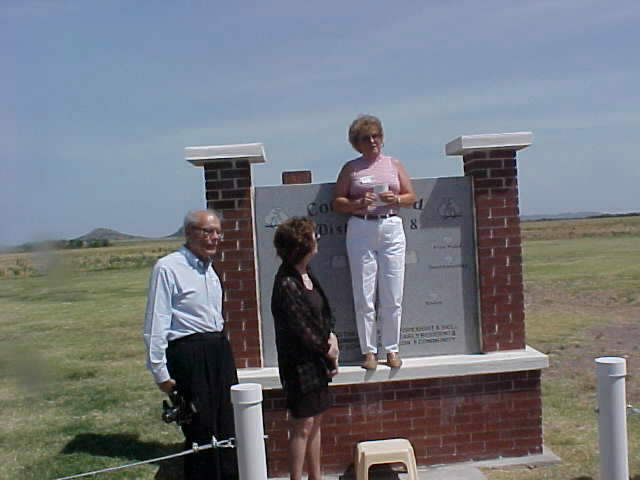 In the next picture, Charlena has asked Margaret (Vanderslice) Walker ('52) and her husband Wyatt to come forward to be recognized in connection with the generous supplementary gift that allowed us to avoid some serious compromises in the site design in the last few months of development. 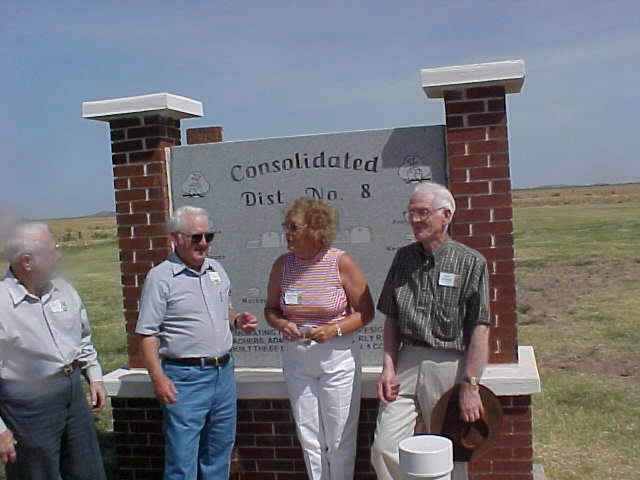 And now we have up front,  Mr. Chig Cleal of the first Con. 8 diploma class (1933),  and Willie Jackson CoChair of the Memorial Committee (and with Charlena and Norene part of the on-site work-management team).  Jack Culvahouse is to Charlena's left,  possibly wondering what he will say in a few minutes. 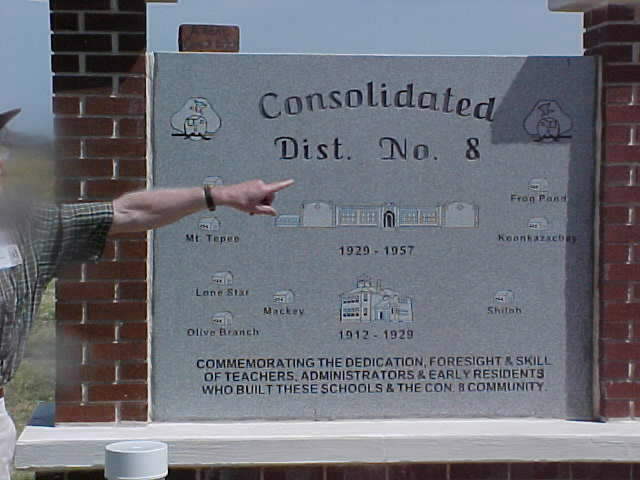 Happily the marker virtually spoke for itself and Jack  had to do little more than point.  Here he points to a Pirate (the left handed one), the schools logo symbolizing  the unifying  spirit that strengthened  community bonds in this extended and diverse area.  Thus both the left and right handed  Pirates, were helpmates of those who are mentioned in the commemorative statement at the bottom of the marker. 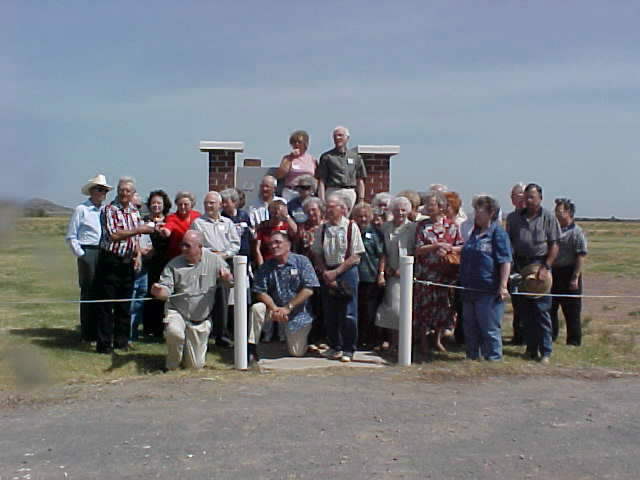 Afterwards,  the  former Con. 8'ers out at the site,  assembled in front of the monument for the photographer from the Hobart newspaper.  But this one is from Ted. Must have been taken by his helper as he is in it. 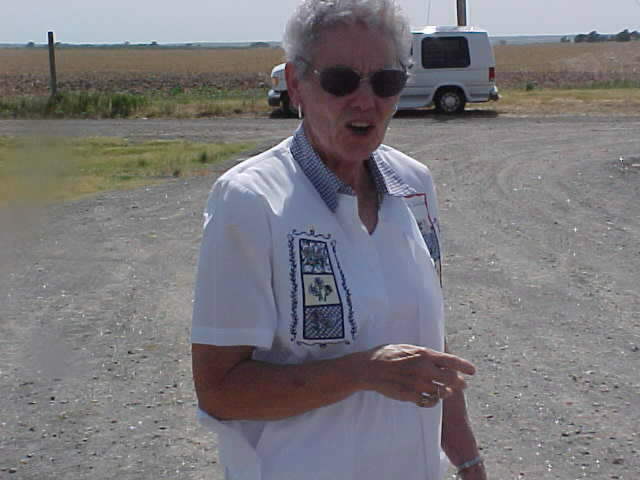 Then after just about everyone had left for the cool comfort of the Senior Citizens Center,   Ted finally got a picture of Norene Jackson (Con. 8'er by marriage to Willie) who spend a lot time working on making this site so beautiful.


So the last cars departed and by just after five, everyone was regrouped in  the beautifully decorated Roosevelt Senior Citizens Center. 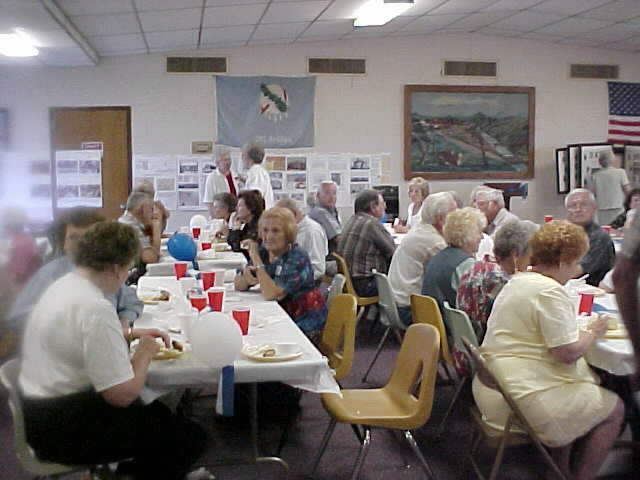 Our photographs skip on beyond an active hour of visiting  to the dinner catered by Roy's Backyard BBQ of Hobart.  This picture shows the evident  enjoyment of the food and visits;   and shows to some extent  the attractive table decorations arranged by the organizing committee.    Also visible on the walls, are a few of the 20 posters with pictures, maps, stories and other exhibits relating to the history of the Con. 8 community---a sort of progress report on the ongoing history project.

On display,  as has been true for a number of years, were the Con. 8 high school graduates picture collages for most of the twenty five years for which diplomas were awarded.  On the far right these being studied by one of our attendees.

After the meal and further visiting,  more programmed activities were on the agenda.   Sylvia read  some comments that had been written in by some of the attendees and then some more real Con. 8 History was contributed extemporaneously by many others who came to the podium to share their memories with the entire assembly.

Then Sylvia asked that all who attended Con. 8 as students to come up to the podium in groups according to the year their class graduated whether they happened to still be a Con. 8 at graduation time or not.  I think that between Ruth Culvahouse (who ran out of film),  Ted Blish (who got some good ones), and Jack Culvahouse (who missed a lot of shots),  a reasonable representation of those groups who had members present was obtained.  Other contributions would no doubt improve it.  Link directly here  Then back buttons to here and then on back to the home page when done